Who Is Who in World Intelligence and Security Agencies : DGSE ORGANIZATION CHART

The French equivalent to the United Kingdom’s MI6 and the United States’ CIA, the DGSE operates under the direction of the French Ministry of Defence and works alongside its domestic counterpart, the DGSI (General Directorate for Internal Security), in providing intelligence and safeguarding national security, notably by performing paramilitary and counterintelligence operations abroad.

As with most other intelligence agencies, details of its operations and organization are not made public. [WIKIPEDIA]

The DSGE’s head office is in the 20th arrondissement of Paris.

The DGSE is considered one of the world’s most respected intelligence agencies, especially in regards to economic intelligence

Beside the General-Directorate headed by Bernard Bajolet, the DGSE includes the following 5 Directorates:

RELATED POST: Who Is Who in World Intelligence and Security Agencies : DGSE – Bernard BAJOLET

Responsible for electronic intelligence and devices 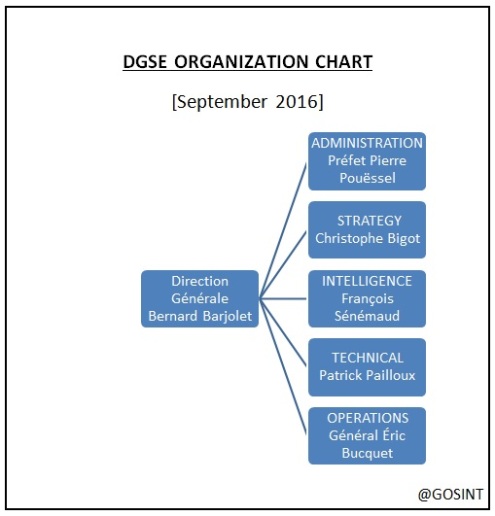 The DGSE’s activities, defined by the Political Authorities, are exclusively tasked to protect French interests. Its activities particularly contribute to protecting French citizens anywhere in the world. For this particular mission, the DGSE closely works with all the national security services.

The DGSE has several characteristics. It is at the same time:

An external Intelligence Service, collecting secret information abroad that concerns national security. By communicating collected elements to the Authorities, DGSE actively participates in the decision-making process. The DGSE is present, of course, in crises theatres and where French interests are at risk.

A Special Service enabling a presence where Diplomatic channels can no longer be applied. Keeping the means deployed and the targeted objectives secret also guarantees the security of our agents.

An Integrated Service, contrary to other western Intelligence Services, DGSE masters all the intelligence collecting methods: human sources (HUMINT), technical sensors (SIGINT and satellite imagery), operational means and open-source processing. Intelligence collected through collaboration with other Services, national and foreign, is positively increasing. [DGSE: Who we are?]

Who Is Who in World Intelligence and Security Agencies : DGSE ORGANIZATION CHART

This entry was posted in DGSE, Who Is Who and tagged DGSE, GOSINT, Who Is Who. Bookmark the permalink.