New Documents: Benghazi Had Nothing to Do With Protests

“This document removes any further doubt that the State Department and the Obama administration knew immediately after the assault on Benghazi that it was a well-orchestrated terrorist attack and not a ‘spontaneous demonstration’ over a ‘hateful video,’ as the Obama administration repeatedly claimed. These documents show that the Benghazi scandal is not over … not by a long shot.” 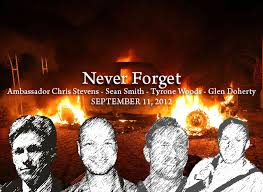 Senator Rand Paul has always claimed that Hillary Clinton lied to Congress about the true nature of the CIA operation in Benghazi that was attacked by terrorists in 2012. Will we ever know the truth? Follow us on Twitter: @Intel_Today

At 9:40 p.m., September 11, members of Ansar al-Sharia attacked the American diplomatic compound in Benghazi resulting in the deaths of U.S. Ambassador to Libya J. Christopher Stevens and U.S. Foreign Service Information Management Officer Sean Smith. Stevens was the first U.S. ambassador killed in the line of duty since 1979.

At around 4:00 a.m. on September 12, the group launched a mortar attack against a CIA annex approximately one mile (1.6 km) away, killing CIA contractors Tyrone S. Woods and Glen Doherty and wounding ten others. At the behest of the CIA, top U.S. officials initially described the attacks as the results of a spontaneous protest triggered by recently released anti-Muslim video, Innocence of Muslims. Subsequent investigations showed that the attack was premeditated. [Wikipedia]

“I do believe that the CIA annex in Benghazi was procuring weapons, some of them to get them away from the jihadists in Libya. But some of it to ferry those weapons through Turkey, into Syria.”

Senator Rand Paul believes that the CIA annex of the Benghazi Embassy was used to shop weapons to ISIS.

Under oath before Congress in 2013, Hillary Clinton answered a question from Senator Paul, saying she knew nothing about the weapons shipments from Libya to Syria.

Judicial Watch just released 54 pages of new State Department documents, including a transcript of a September 12 2012, telephone conference call with congressional staffers in which then-Under Secretary of State for Management Patrick Kennedy admitted that the deadly terrorist assault on the Benghazi Consulate was not “under cover of protest,” but was, in fact, “a direct breaching attack.”

The documents were produced in response to a January 29, 2016, Freedom of Information Act (FOIA) lawsuit that was filed in the U.S. District Court for the District of Columbia after the State Department failed to respond to an August 27, 2015, FOIA request (Judicial Watch v. U.S. Department of State (No. 1:16-cv-00153)).

When asked why no Americans troops were inserted, Kennedy responded that “the entire thing lasted approximately 4.5 hours. No US forces within time to get there.”  (This was false, troops were available and could have arrived in time to provide support during the second attack on the CIA annex, which according to Kennedy, was assaulted by 100 attackers.)

Despite Kennedy’s admission on September 12 that the deadly terrorist assault on the Benghazi Consulate was not “under cover of protest,” but was, in fact, “a direct breaching attack,” U.S. Ambassador to the U.N. Susan Rice appeared on five major interview shows the Sunday, September 16, to claim the attack was due to a “spontaneous protest” and was not premeditated.

“Based on the best information we have to date, what our assessment is as of the present is in fact what began spontaneously in Benghazi as a reaction to what had transpired some hours earlier in Cairo where, of course, as you know, there was a violent protest outside of our embassy —sparked by this hateful video … We do not—we do not have information at present that leads us to conclude that this was premeditated or pre-planned.”

“These documents show that the Benghazi scandal is not over … not by a long shot.”

RELATED POST: CIA Director Mike Pompeo — Who Is Who in World Intelligence and Security Agencies?

How did he get the job? Pompeo is VERY close to Mr Trump’s running mate, Indiana Governor Mike Pence, and helped prepare him for his televised vice-presidential debate. REMEMBER THAT! (Just in case we have to talk about impeachment sometime down the road…)

Then again, there seems to be the “benghazi factor”. It appears that Mr. Pompeo’s role in the Benghazi inquiry was a significant factor in Mr. Trump’s decision to select him to lead the C.I.A. Some members of the president-elect’s transition team viewed a competing candidate for the position, former Representative Mike Rogers of Michigan, as “soft” on Benghazi because Mr. Rogers, as chairman of the House Intelligence Committee, oversaw a report that they believed was not tough enough on Mrs. Clinton.

Mr. Pompeo (and Mr. Jordan) filed a 48-page addendum that said the attacks showed the State Department was “seemingly more concerned with politics and Secretary Clinton’s legacy than with protecting its people in Benghazi.”

Michael Bay has assured audiences that his Libyan-set military thriller 13 Hours: The Secret Soldiers of Benghazi is an accurate retelling of the events surrounding the terrorist attack in Benghazi in 2012, which resulted in the death of four people, including the US ambassador to Libya.

But according to the CIA officer in charge of the American intelligence agency’s top-secret Benghazi facility that night, one of the most important moments of the film is entirely wrong.

“There never was a stand-down order,” the officer – the former chief of the so-called Annex who identified himself as ‘Bob’ – told the Washington Post.

“At no time did I ever second-guess that the team would depart.”

Rand Paul: CIA Annex In Benghazi Shipped Arms From Libya To Syria; Clinton Lied About It

Michael Bay’s Benghazi movie 13 Hours is ‘inaccurate’, according to CIA officer — The Guardian