“What I can say for sure herein is that what the country is now being told by the White House cannot be true and the fact that this information has been provided in this format raises the most serious questions about the handling of our national security.” 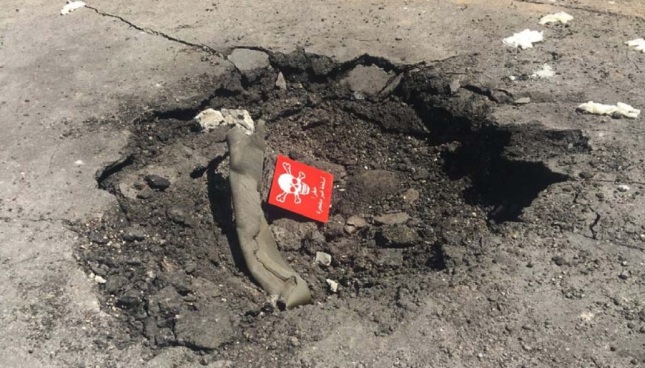 Close up photograph of the crater that has been shown in numerous mainstream media publications that the White House alleges is proof that the source of the nerve agent attack was the Syrian government.

President Trump’s National Security Council has released a declassified four-page ‘white paper’ detailing the evidence of the alleged sarin attack. MIT Professor Theodore Postol has concluded that the assessment contains absolutely no evidence that this attack was the result of a munition being dropped from an aircraft. Here is the four-page ‘white paper’. The analysis by Professor Postol will be posted soon. Follow us on Twitter: @INTEL_TODAY

The Assad Regime’s Use of Chemical Weapons on April 4, 2017

The United States is confident that the Syrian regime conducted a chemical weapons
attack, using the nerve agent sarin, against its own people in the town of Khan Shaykhun in southern Idlib Province on April 4, 2017. According to observers at the scene, the attack
resulted in at least 50 and up to 100 fatalities (including many children), with hundreds of
additional injuries.

We have confidence in our assessment because we have signals intelligence and
geospatial intelligence, laboratory analysis of physiological samples collected from multiple victims, as well as a significant body of credible open source reporting, that tells a clear and consistent story. We cannot publicly release all available intelligence on this attack due to the need to protect sources and methods, but the following includes an unclassified summary of the U.S. Intelligence Community’s analysis of this attack.

Summary of the U.S. Intelligence Community’s Assessment of the April 4 Attack

The Syrian regime maintains the capability and intent to use chemical weapons against the
opposition to prevent the loss of territory deemed critical to its survival. We assess that
Damascus launched this chemical attack in response to an opposition offensive in northern Hamah Province that threatened key infrastructure. Senior regime military leaders were probably involved in planning the attack.

A significant body of pro-opposition social media reports indicate that the chemical attack
began in Khan Shaykhun at 6:55 AM local time on April 4.

Our information indicates that the chemical agent was delivered by regime Su-22 fixed-wing aircraft that took off from the regime-controlled Shayrat Airfield. These aircraft were in the vicinity of Khan Shaykhun approximately 20 minutes before reports of the chemical attack began and vacated the area shortly after the attack. Additionally, our information indicates personnel historically associated with Syria’s chemical weapons program were at Shayrat Airfield in late March making preparations for an upcoming attack in Northern Syria, and they were present at the airfield on the day of the attack.

Hours after the April 4 attack, there were hundreds of accounts of victims presenting
symptoms consistent with sarin exposure, such as frothing at the nose and mouth,
twitching, and pinpoint pupils. This constellation of symptoms is inconsistent with exposure to a respiratory irritant like chlorine— which the regime has also used in attacks—and is extremely unlikely to have resulted from a conventional attack because of the number of victims in the videos and the absence of other visible injuries. Open source accounts posted following the attack reported that first responders also had difficulty breathing, and that some lost consciousness after coming into contact with the victims— consistent with secondary exposure to nerve agent.

By 12:15 PM local time, broadcasted local videos included images of dead children of
varying ages. Accounts of a hospital being bombed began to emerge at 1:10 PM local, with
follow-on videos showing the bombing of a nearby hospital that had been flooded with
victims of the sarin attack. Commercial satellite imagery from April 6 showed impact craters around the hospital that are consistent with open source reports of a conventional attack on the hospital after the chemical attack. Later on April 4, local physicians posted videos specifically pointing out constricted pupils (a telltale symptom of nerve agent exposure), medical staff with body suits on, and treatments involving atropine, which is an antidote for nerve agents such as sarin

We are certain that the opposition could not have fabricated all of the videos and other
reporting of chemical attacks. Doing so would have required a highly organized campaign to deceive multiple media outlets and human rights organizations while evading detection. In addition, we have independently confirmed that some of the videos were shot at the
approximate times and locations described in the footage.

Further, the World Health Organization stated on April 5 that its analysis of the victims of the attack in Syria showed they had been exposed to nerve agents, citing the absence of
external injuries and deaths due to suffocation. Doctors without Borders (Medecins Sans
Frontieres; MSF) said that medical teams treating affected patients found symptoms to be
consistent with exposure to a neurotoxic agent such as sarin. And Amnesty International
said evidence pointed to an air-launched chemical attack. Subsequent laboratory analysis of physiological samples collected from multiple victims detected signatures of the nerve agent sarin.

The Syrian regime and its primary backer, Russia, have sought to confuse the world
community about who is responsible for using chemical weapons against the Syrian people
in this and earlier attacks. Initially, Moscow dismissed the allegations of a chemical
weapons attack in Khan Shaykhun, claiming the attack was a “prank of a provocative
nature” and that all evidence was fabricated. It is clear, however, that the Syrian opposition could not manufacture this quantity and variety of videos and other reporting from both the attack site and medical facilities in Syria and Turkey while deceiving both media observers and intelligence agencies.

Moscow has since claimed that the release of chemicals was caused by a regime airstrike
on a terrorist ammunition depot in the eastern suburbs of Khan Shaykhun. However, a
Syrian military source told Russian state media on April 4 that regime forces had not carried out any airstrike in Khan Shaykhun, contradicting Russia’s claim. An open source video also shows where we believe the chemical munition landed—not on a facility filled with weapons, but in the middle of a street in the northern section of Khan Shaykhun. Commercial satellite imagery of that site from April 6, after the allegation, shows a crater in the road that corresponds to the open source video.

Moscow has suggested that terrorists had been using the alleged ammunition depot to
produce and store shells containing toxic gas that they then used in Iraq, adding that both
Iraq and international organizations have confirmed the use of such weapons by militants.
While it is widely accepted that the Islamic State of Iraq and Syria (ISIS) has repeatedly
used sulfur mustard on the battlefield, there are no indications that ISIS was responsible for this incident or that the attack involved chemicals in ISIS’s possession.

Moscow suggested this airstrike occurred between 11:30 AM and 12:30 PM local time on
April 4, disregarding that allegations first appeared on social media close to 7:00 AM local
time that morning, when we know regime aircraft were operating over Khan Shaykhun. In
addition, observed munition remnants at the crater and staining around the impact point are consistent with a munition that functioned, but structures nearest to the impact crater did not sustain damage that would be expected from a conventional high-explosive payload. Instead, the damage is more consistent with a chemical munition.

The Syrian regime has used other chemical agents in attacks against civilians in opposition
held areas in the past, including the use of sulfur mustard in Aleppo in late 2016. Russia has alleged that video footage from April 4 indicated that victims from this attack showed the same symptoms of poisoning as victims in Aleppo last fall, implying that something other than a nerve agent was used in Khan Shaykhun. However, victims of the attack on April 4 displayed tell-tale symptoms of nerve agent exposure, including pinpoint pupils, foaming at the nose and mouth, and twitching, all of which are inconsistent with exposure to sulphur mustard.

Russia’s allegations fit with a pattern of deflecting blame from the regime and attempting to undermine the credibility of its opponents. Russia and Syria, in multiple instances since mid2016, have blamed the opposition for chemical use in attacks. Yet similar to the Russian narrative for the attack on Khan Shaykhun, most Russian allegations have lacked specific or credible information. Last November, for instance, senior Russian officials used an image from a widely publicized regime chemical weapons attack in 2013 on social media platforms to publicly allege chemical weapons use by the opposition. In May 2016, Russian officials made a similar claim using an image from a video game. In October 2016, Moscow also claimed terrorists used chlorine and white phosphorus in Aleppo, even though pro-Russian media footage from the attack site showed no sign of chlorine use. In fact, our Intelligence from the same day suggests that neither of Russia’s accounts was accurate and that the regime may have mistakenly used chlorine on its own forces. Russia’s contradictory and erroneous reports appear to have been intended to confuse the situation and to obfuscate on behalf of the regime.

Moscow’s allegations typically have been timed to distract the international community from Syria’s ongoing use of chemical weapons—such as the claims earlier this week—or to
counter the findings from the Organization for the Prohibition of Chemical Weapons
(OPCW)-United Nations (UN) Joint Investigative Mechanism (JIM), which confirmed in
August and October 2016 reports that the Syrian regime has continued to use chemical weapons on multiple occasions long after it committed to relinquish its arsenal in 2013.
Russia has also questioned the impartial findings of the JIM—a body that Russia helped to
establish—and was even willing to go so far as to suggest that the Assad regime should
investigate itself for the use of chemical weapons.

Moscow’s response to the April 4 attack follows a familiar pattern of its responses to other
egregious actions; it spins out multiple, conflicting accounts in order to create confusion and sow doubt within the international community.

International Condemnation and a Time for Action

The Assad regime’s brutal use of chemical weapons is unacceptable and poses a clear
threat to the national security interests of the United States and the international community. Use of weapons of mass destruction by any actor lowers the threshold for others that may seek to follow suit and raises the possibility that they may be used against the United States, our allies or partners, or any other nation around the world.

The United States calls on the world community in the strongest possible terms to stand
with us in making an unambiguous statement that this behavior will not be tolerated. This is a critical moment— we must demonstrate that subterfuge and false facts hold no weight,
that excuses by those shielding their allies are making the world a more dangerous place,
and that the Syrian regime’s use of chemical weapons will not be permitted to continue.

We must remember that the Assad regime failed to adhere to its international obligations
after its devastating attacks on Damascus suburbs using the nerve agent sarin in August
2013, which resulted in more than one thousand civilian fatalities, many of whom were
children. The regime agreed at that time to fully dismantle its chemical weapons program,
but this most recent attack—like others before it—are proof that it has not done so. To be
clear, Syria has violated its obligations under the Chemical Weapons Convention and the
UN Charter, and no drumbeat of nonsensical claims by the regime or its allies can hide this truth. And while it is an embarrassment that Russia has vetoed multiple UN Security Council resolutions that could have helped rectify the situation, the United States intends to send a clear message now that we and our partners will not allow the world to become a more dangerous place due to the egregious acts of the Assad regime.