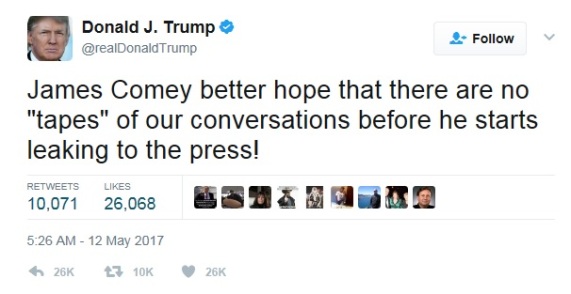 In a tweet on Friday, he said Mr Comey had “better hope that there are no ‘tapes’ of our conversations”.

Mr Comey, who had been leading an inquiry into possible collusion between Trump election campaign officials and Russia, was fired on Tuesday.

When the Justice Department dropped charges against a Temple University physics professor in 2015, it was an embarrassing acknowledgment that F.B.I. agents and prosecutors had misunderstood the complicated technology that they accused him of illegally sending to China.

The professor, Xi Xiaoxing, now says it was not an innocent mistake. In a federal lawsuit he filed on Wednesday, he accused the lead F.B.I. agent of falsifying the key piece of evidence and ignoring repeated warnings that he was investigating an innocent man.

The lawsuit is a sharp rejoinder to the government’s crackdown on Chinese spies, which has been undermined by a series of high-profile missteps, including Dr. Xi’s case. The Justice Department reorganized its staff in recent years to focus on preventing the theft of American trade secrets and other acts of espionage by China and other nations.

“They are paid with taxpayer money to catch spies. And they catch people like me, who have done nothing wrong,” Dr. Xi said in an interview. “I wish they’d catch more spies.”

A Russian honeytrap for Gen Flynn? Not me… — BBC

When Svetlana Lokhova saw the internet light up with suggestions she was a Russian spy, she initially thought it was a joke. But the Russian-born academic soon found herself, in her words, “collateral damage” in the controversies surrounding the Trump administration and the swirl of allegations about Russian espionage.

The claims revolved around her contact with Gen Michael Flynn in Cambridge in 2014. Flynn resigned after just 24 days as US National Security Adviser after allegations he had failed to be honest about contacts with the Russian Ambassador to the US during the transition to the Trump administration.

After his resignation in February, there were reports in the US and UK media about Lokhova, including the claim that Flynn’s contact with Lokhova “troubled” US intelligence officials. On social media, the suggestion was that she was some kind of Russian spy or honeytrap.

Russia’s growing aggression toward the United States has deepened concerns among U.S. officials that Russian spies might try to exploit one of the world’s most respected cybersecurity firms to snoop on Americans or sabotage key U.S. systems, according to an ABC News investigation.

Products from the company, Kaspersky Lab, based in Moscow, are widely used in homes, businesses and government agencies throughout the United States, including the Bureau of Prisons. Kaspersky Lab’s products are stocked on the shelves of Target and Best Buy, which also sells laptops loaded by manufacturers with the firm’s anti-virus software.

“This [is an] important national security issue,” declared the bipartisan memorandum, described to ABC News by congressional sources.