“If somebody tells me that he has the rockets to shoot — which we know from other sources, anyway — and tells me what he will shoot, how he will shoot it, and in general says virtually everything except for the precise date — well, what should I feel like if I’m surprised when the man shoots?” 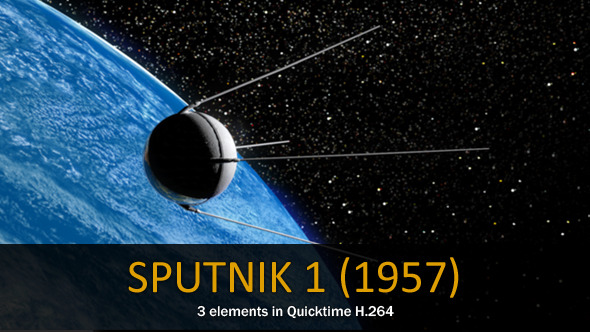 On October 4 1957, the Soviet Union launched SPUTNIK-1 into an elliptical low Earth orbit. It was a 58 cm (23 in) diameter polished metal sphere, with four external radio antennas to broadcast radio pulses. Its radio signal was easily detectable even by amateurs, and the 65° inclination and duration of its orbit made its flight path cover virtually the entire inhabited Earth. This surprise success precipitated the American Sputnik crisis and triggered the Space Race, a part of the Cold War. The launch ushered in new political, military, technological, and scientific developments. Follow us on Twitter: @INTEL_TODAY

On October 4 2017, the CIA issued the following message and released a collection of previously classified documents on the Sputnik program.

On 4 October 1957, the Soviet Union successfully launched the Sputnik-1 earth satellite into space—an achievement that stunned the American public and press, but not the U.S. policy and intelligence communities. The Central Intelligence Agency (CIA) reported the advancements that led to this landmark launch to President Eisenhower, providing him with the strategic advantage to guide the U.S. response.

Today, on the 60th anniversary of Sputnik’s first launch, the CIA released a collection of previously classified documents on the Sputnik program. The collection includes CIA’s intelligence and analysis of Sputniks-1, -2, and -3 and the Soviet ballistic missile program from 1955 to the early 1960s. Encompassing 59 documents and 440 pages, the release provides new information to the public, to include memoranda and reports the CIA provided to President Eisenhower, on the Soviet Union’s early space and missile programs.

In addition, to commemorate CIA’s strategic warning contributions about Sputnik, Studies in Intelligence, part of the Center for the Study of Intelligence, published an article, Sputnik and U.S. Intelligence: The Warning Record, available at https://www.cia.gov/library/center-for-the-study-of-intelligence/csi-publications/csi-studies/studies/vol-61-no-3/sputnik-the-warning-record.html.

In his public remarks today at the fourth annual National Security Conference co-hosted by CIA and George Washington University, CIA Director Mike Pompeo summarized it all by highlighting the release of the Sputnik collection and the fitting theme of the conference, “Achieving Strategic Advantage,” stating, “The timing couldn’t be more fitting, as exactly 60 years ago today, the Soviet Union launched Sputnik-1 into space, stunning the public, but not America’s leaders.”

The satellite was a success not just in terms of scientific advancement but in terms of providing a propaganda opportunity for the socialist state. (…)

On Soviet radio, various scientists, such as jet propulsion expert Professor Kirill Stanyukovich, called it “a great victory not only for Soviet science but also for the Soviet order”.

“I think that the very fact that this has been achieved in our socialist country must not be regarded as mere chance,” another academic told listeners.

“That we are not as rich as America is no secret to us. Why then has it happened that we have been capable of solving these most advanced and difficult scientific and technical problems ahead of Americans?”

Several digs at America made their way into reports.

“For 40 years they closed their eyes to the enormous successes of Soviet industry and agriculture,” one radio broadcast said. “Now the most reactionary personalities in the USA are trying to raise some doubts about the tremendous value and great significance of this new success of Soviet science.” [BBC]

A sense of urgency in the US: The Berkeley Physics Course

A Sputnik-era project funded by a National Science Foundation grant, the course arose from discussions between Philip Morrison (then at Cornell University) and Charles Kittel (Berkeley) in 1961, and was published by McGraw-Hill starting in 1965.

The Berkeley course was contemporary with The Feynman Lectures on Physics (a college course at a similar mathematical level), and PSSC Physics (a high school introductory course).

These physics courses were all developed in the atmosphere of urgency about science education created in the West by Sputnik.

In the aftermath of the collapse of the Soviet Union, I met with a nuclear physicist from the Institute for Theoretical and Experimental Physics in Moscow. During a casual conversation over a coffee, he made a truly prescient comment:

“The Russians have done to you the very worst that could have been done to the US. They took away your enemy. And the US system can not survive without a worthy enemy.”

I would argue that much of the chaos that we witness today around the planet can be traced back to the US-led invasion of Iraq which — we were told — was necessary because the CIA — and the entire US Intelligence Community — had assessed with high confidence that Saddam had a stock a WMDs ready to be deployed and was actively developing nuclear weapons. Of course, none of this was true.

As Robert Fisk reminds us, the only lesson we ever learn from History is that we never learn.

“Today, we are engaged in a fruitless debate. What went wrong? How did the people – the senatus populusque Romanus of our modern world – not rise up in rebellion when told the lies about weapons of mass destruction, about Saddam’s links with Osama bin Laden and 11 September? How did we let it happen? And how come we didn’t plan for the aftermath of war?”

And indeed, the misguided intervention of Western powers in Libya is a proof that our leaders learn absolutely nothing from past mistakes.

Sputnik: How the Soviet Union spun the satellite launch — BBC

This entry was posted in Sputnik and tagged CIA, Sputnik. Bookmark the permalink.