The Dark Past of Special Prosecutor Robert Mueller — The Bulger Gang, Lockerbie, Anthrax… An Exceptional Failure All Round.

“The wrong guy was the only guy. Worse, all those who failed to name the actual culprits, thanks to incompetence or intent, face no interrogation. Increasingly, Lockerbie resembles a political-management precursor to our manipulated post-11 September, 2001 world: pick your villain, pick your story, then bend your laws, your politics, and your media to fit Democracy.”

“In respect of the Lockerbie case, a country, a whole people, a justice system, and the truth were sacrificed in order that the status quo between Edinburgh and London (indeed Washington) was preserved and maintained. Not the status quo around the symbolic political union between the two nations, but the status quo inherent at a far deeper level than the superficial, as I say symbolic, distinctions made in public. The UK and the West’s foreign policy, and the historical perceptions created whether with regards to Libya, Iraq or Iran, are as strategic in their political motivations as they are the very essence of our notions of the noble empire and its ‘democracy’.” 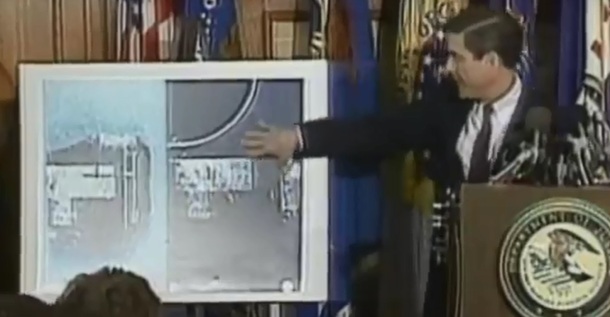 Robert Mueller was assistant attorney general in the United States in 1991 when indictments were issued for the two Libyan suspects, Megrahi and Al-amin Khalifa Fimah. A young Mueller is explaining the importance of PT/35(b), a small fragment of a circuit timer that was allegedly found among the debris of Pan Am 103 near the town of Lockerbie. Today, we know that PT/35(b) is a forgery that was planted to blame Libya for the tragedy.

MSM commentators systematically describe Robert Mueller as a stellar and credible law enforcement figure. I find it hard to understand how a man who bungled major investigations — from Lockerbie to the 2001 Anthrax Attacks — is hailed for his impeccable character by much of Official Washington, Democrats and Republicans alike. All this mythological nonsense could hardly be further from the Truth. Follow us on Twitter: @INTEL_TODAY

RELATED POST: Lockerbie — Megrahi Conviction to be Reviewed by the SCCRC

RELATED POST: One Year Ago — Lockerbie : An open letter from Dr Jim Swire

Coleen Rowley is a retired FBI special agent and division legal counsel. In a May 2002 memo to then-FBI Director Robert Mueller, she exposed some of the FBI’s pre-9/11 failures. She was named one of TIME magazine’s “Persons of the Year” in 2002. Rowley seems to be one of the rare persons who remembers correctly Mueller’s ‘achievements’ over a very inglorious career.

Long before he became FBI Director, serious questions existed about Mueller’s role as Acting U.S. Attorney in Boston in effectively enabling decades of corruption and covering up of the FBI’s illicit deals with mobster Whitey Bulger and other “top echelon” informants who committed numerous murders and crimes.

When the truth was finally uncovered through intrepid investigative reporting and persistent, honest judges, U.S. taxpayers footed a $100 million court award to the four men framed for murders committed by (the FBI-operated) Bulger gang.

Current media applause omits the fact that former FBI Director Mueller was the top official in charge of the Anthrax terror fiasco investigation into those 2001 murders, which targeted an innocent man (Steven Hatfill) whose lawsuit eventually forced the FBI to pay $5 million in compensation.

Mueller’s FBI was also severely criticized by Department of Justice Inspector Generals finding the FBI overstepped the law improperly serving hundreds of thousands of “national security letters” to obtain private (and irrelevant) metadata on citizens, and for infiltrating nonviolent anti-war groups under the guise of investigating “terrorism.” (…)

Mueller was even okay with the CIA conducting torture programs after his own agents warned against participation. Agents were simply instructed not to document such torture, and any “war crimes files” were made to disappear. Not only did “collect it all” surveillance and torture programs continue, but Mueller’s (and then Comey’s) FBI later worked to prosecute NSA and CIA whistleblowers who revealed these illegalities.

Robert Mueller was assistant attorney general in the United States in 1991 when indictments were issued for the two Libyan suspects, Megrahi and Al-amin Khalifa Fimah. At the Zeist trial in 2001, Fimah was found NOT guilty but Megrahi was found guilty.

During the indictment speech, Mueller explained the importance of PT/35(b), a small fragment of a circuit timer that was allegedly found among the debris of Pan Am 103 near the town of Lockerbie.

PT/35(b) was the key piece of evidence of the Lockerbie Case. As Richard Marquise (FBI Agent who led the US side of the investigation and reported directly to Mueller) himself said:  “Without PT/35(b), there would have been no indictment.”

This fragment was eventually matched to a timer (MST-13) discovered among the weapons and material seized from rebels after an attempted coup in Togo on 23rd September 1986.

RELATED POST: Lockerbie — The Fairy Tale of the Togo Timers

RELATED POST: Blast From The Past — Reagan and the 1986 “Libyan Terrorism” Disinformation Op

This MST-13 had been manufactured by the Swiss company MEBO and supplied “solely” to Libya.

Today, we know that PT/35(b) is a forgery. We also know that at least one witness was well aware that PT/35(b) could not have been part of the MST-13 timers delivered to Libya and that this witness deliberately withheld  this information from the court.

But back in 1992, it would appear that some folks at the Crown office had their own doubts…

Following submission of the Police Report (section 30.0 dealing with PT/35b to the Crown), it was requested that certain further tests which had earlier been carried out on the fragment also be performed on the control sample [ DP/347(a)] of MST-13 circuit board.

Five tests were carried out in the period from 28 February 1992 to 6 March 1992. The conclusion of the report states that none of the scientists would say conclusively that PT/35(b) and DP/347(a) were specifically the same material or from the same source.

In fact, all these scientists had pointed out correctly various methods to establish that PT/35(b) was NOT similar to the control sample of the timers delivered to Libya.

At that point in time, it would have been scientifically straightforward to demonstrate that PT/35(b) — the key piece of evidence linking Libya to Lockerbie — was a forgery.

But nothing was done and a few weeks later — on 31 March 1992 — the UN Security Council passed resolution 748 imposing mandatory sanctions on Libya for failing to hand over Megrahi and Fhimah.

The 2001 anthrax attacks, also known as Amerithrax from its Federal Bureau of Investigation (FBI) case name, occurred within the United States over the course of several weeks beginning on September 18, 2001, one week after the September 11 attacks. Letters containing anthrax spores were mailed to several news media offices and two Democratic U.S. Senators (Tom Daschle and Patrick Leahy), killing 5 people and infecting 17 others. According to the FBI, the ensuing investigation became “one of the largest and most complex in the history of law enforcement”.

A major focus in the early years of the investigation was a bio-weapons expert named Steven Hatfill, who was eventually exonerated. Another suspect, Bruce Edwards Ivins, became a focus of investigation around April 4, 2005. Ivins was a scientist who worked at the government’s biodefense labs at Fort Detrick in Frederick, Maryland. On April 11, 2007, Ivins was put under periodic surveillance and an FBI document stated that “Bruce Edwards Ivins is an extremely sensitive suspect in the 2001 anthrax attacks.” On July 29, 2008, Ivins committed suicide with an overdose of acetaminophen.

On August 6, 2008, based on DNA evidence leading to an anthrax vial in Ivins’s lab, federal prosecutors declared Ivins to be the sole culprit of the crime. Two days later, Senator Chuck Grassley and Rep. Rush Holt called for hearings into the DOJ and FBI’s handling of the investigation. On February 19, 2010, the FBI formally closed its investigation.

In 2008, the FBI requested a review of the scientific methods used in their investigation from the National Academy of Sciences, which released their findings in the 2011 report Review of the Scientific Approaches Used During the FBI’s Investigation of the 2001 Anthrax Letters.

The report cast doubt on the U.S. government’s conclusion that Ivins was the perpetrator, finding that although the type of anthrax used in the letters was correctly identified as the Ames strain of the bacterium, there was insufficient scientific evidence for the FBI’s assertion that it originated from Ivins’s laboratory.

The Back Story On Robert Mueller | Los Angeles Times

“Pick your villain, pick your story, then bend your laws, your politics, and your media to fit Democracy.”

Mueller starts his ‘investigation’ with a script acceptable to his masters and his villains among America’s favourites.

Mueller does not allow his people to investigate. He expects them to find ‘evidence’ to back up his story.

He then builds very circumstantial cases against minor actors, often based on the testimony of well rewarded — and not credible — snitches while at the same time ignoring hard and undisputable scientific facts.

Whenever he manages to get an indictment in a kangaroo court, he then parades on the media to explain that more people, including the top dog, are guilty.

In this video, you can hear Mueller explaining that the Lockerbie bombing was a well executed operation. According to the indictment, an unaccompanied luggage contained the bomb that destroyed the plane. The luggage ended ‘by pure luck’ at the very weakest location on the plane. Terrorists would have had ZERO control over that parameter. So, how does this qualify for a well-planned operation?

Wisdom of the Crowd — Can you help?

The picture at the top of this post was extracted from the following video. I would like very much to have a copy of Mueller’s presentation during the indictment. I want to hear what he said about PT/35(b). I will explain in great details why we know that this fragment is a forgery.

PS: You may have noticed that William Webster came to the rescue of Robert Mueller in an opinion piece published by the NYT. That is almost funny.

Webster was Director of the Federal Bureau of Investigation (FBI) from 1978 to 1987, and then Director of Central Intelligence (CIA) from 1987 to 1991—the only person to have held both these positions. Both appointments were intended to recover a bit of credibility following major scandals: Watergate and the Iran-Contra affair.

Thus, Webster was the CIA boss during the Lockerbie investigation. My research led me to believe that the CIA, and only the CIA, had the means, motive, and opportunity to fabricate and plant PT/35(b) among the debris of Pan Am 103.

I Led the F.B.I. Mueller Is Just Doing His Job by William Webster

The Dark Past of Special Prosecutor Robert Mueller — The Bulger Gang, Lockerbie, Anthrax… An Exceptional Failure All Round.

1 Response to The Dark Past of Special Prosecutor Robert Mueller — The Bulger Gang, Lockerbie, Anthrax… An Exceptional Failure All Round.