“There are troubling early signs that cocaine availability is on the rise in the US for the first time in nearly a decade.”

“The old conventional wisdom of this being a conspiracy theory survived even if the evidence is now incontrovertible. So even NARCOS wants to avoid the issue and pretends it did not happen.”

September 19 2018 — Colombian cocaine production hit record levels in 2017, according to newly released UN statistics. The UN Office on Drugs and Crime (UNODC) says production rose about 31% year on year to some 1,400 tonnes, cultivated on 171,000 hectares. It is estimated that the potential production of cocaine has a value of 2.7 billion dollars in the local market. Follow us on Twitter: @Intel_Today

RELATED POST: US REPORT: Colombia’s cocaine production is ‘up’. Really?

In August 2018, newly elected President Ivan Duque told reporters the government would create a new drug-fighting policy, saying the goal was to have “concrete results” in the next four years. Don’t bet on it just yet!

The area under coca cultivation in Colombia reached the highest ever recorded figure of 171,000 hectares (ha) in 2017, according to UNODC’s Coca Cultivation Survey Report for Colombia, launched in Bogotá today.

This represents an increase of 25,000 hectares, or 17 per cent in 2017 compared to 2016.According to the Report, produced by the Integrated System for Monitoring Illicit Crops (SIMCI) Project of UNODC, the departments of Antioquia, Putumayo, Norte de Santander and Cauca show the biggest increase in coca crop area of around 64 per cent.

Further findings of the Report:

• The department of Nariño and the municipality of Tumaco are still the most affected areas in the country, although in Tumaco the area under coca cultivation was down by 16 per cent.

• The greatest reduction in the area under coca cultivation was in the department of Guaviare, where cultivation decreased by 1,915 ha, compared to 2016.

• 33 per cent of the area under coca cultivation are located more than 10 kilometres away from populated areas and 34 per cent used to be a forest in 2014.

• 16 per cent of the coca cultivation areas are less than 10 kilometres away from a border. The borders with Venezuela and Ecuador are the most affected.

• The prices of fresh coca leaf, paste and cocaine hydrochloride fell by 28, 14 and 11 per cent, respectively.

It is estimated that the potential production of cocaine has a value of 2.7 billion dollars in the local market.

There are concerns that this capital, derived from the drug economy, could undermine peace-building efforts, weaken the culture of lawfulness, strengthen armed groups and delegitimize democratic institutions through corruption and illicit financial flows.

Since 2000, the US has sent Bogotá more than US $10 billion in counter-narcotics and security assistance through the infamous ‘Plan Colombia’. The result is nil. Colombia’s cocaine  production has remained ‘more or less’ constant over the last two decades.

According to a recent report, Colombia’s cocaine production is ‘up’. Let us be a bit skeptical about this kind of ‘news’. I will let you decide whether this is ‘Fake News’ or ‘Propaganda’? But I will argue that there is plenty of evidence that these statistics have been manipulated over the last 15 years to fit the ‘policy of the day’.

Truth being told, Colombia’s cocaine production has probably been very steady over the last twenty years and almost certainly much higher than reported by the UN and US institutions.

‘Plan Colombia’ has been a total failure. This is hardly a secret. The situation has been known to everyone paying attention for many years. I will not discuss in this post the many unsavory consequences of this policy: the ‘Paracos’, the ‘Falsos Positivos’, the ‘ChuzaDAS’ scandal… I will just discuss the production of cocaine the plan was supposed to eradicate.

Well, obviously, that did not happen. And now, the US State Department is trying very hard to explain the “sudden coca-growing” binge by Colombian farmers.

The truth is that the US government has been playing the ‘Colombian’ statistics for years, partly to pretend the US was winning the ‘War on drugs”. And perhaps for other reasons…

According to the State Department…

The Farc rebels appear to have encouraged farmers in areas under their control to plant as much coca as possible in preparation for the end of the war, “purportedly motivated by the belief that … investment and subsidies will focus on regions with the greatest quantities of coca”.

At the same time, the Government reduced eradication in those areas “to lower the risk of armed conflict”. The Government also ended aerial spraying with herbicides in favour of manual eradication. But local farmers have blocked roads and found other ways to thwart the removal.

The final factor is the Government’s financial squeeze, “resulting in a 90 per cent reduction in the number of manual eradicators in 2016 as compared to 2008”.

The Truth about these Statistics

The official statistics about Colombia’s cocaine production should be taken with a ‘pinch of salt’. The estimate is very difficult to make. And these difficulties can be ‘exploited’ to fudge the numbers according to a political agenda.

Crash course — Roughly speaking, one must first estimate the amount of coca crop hectares in Colombia. (Keep in mind that depending on the location, the number of harvest per year may vary from two to six!)

The US government’s 2015 report estimates that Colombia’s coca cultivation amounted to about  159,000 hectares. This number is highly uncertain. Firstly, the satellite pictures must be corrected for the ‘clouds’ effect which is an important correction in areas where the coca is cultivated. Next, farmers have learned to cultivated small parcels of coca in the middle of legal crops and these cannot be detected by satellites.

Then,  one has to analyze the estimates of coca to cocaine yield, which will — of course — depend on the exact variety of the coca plants and the location of these farms.

Colombian farmers  have been crossing different strains of coca to get a variation that produces more cocaine hydrochloride.

Recently, most scientists estimate that Colombian producers can get at least 6 kilograms of cocaine from each hectare of coca. The US government use a very low — certainly unrealistic — yield of 2.6 kg per hectare.

The average true yield in Colombia is probably around 6 kg, and perhaps higher. (There has been — unconfirmed — rumors of bio-engineering…)

[UPDATE (Sept 22 2018) — In 2016 a survey was carried out in the Putumayo-Caquetá region under the “Economic structure characterization of Agricultural Production Units” programme, which is applied in coca crops areas of influence. Yield assessment studies were also carried out in the field in 2017 which resulted in a fresh coca leaf yield equivalent to 6.7 mt/ha/year for this region.

This value was applied retroactively to 2016, since farmers had reported a similar value in the 2016 survey, equivalent to 3.3 mt/ha/year. As a result, average potential fresh coca leaf yields and average potential cocaine production were updated, changing from around 4.8 to 5.6 mt/ha/year and from 6.8 to 8.2 kg/ha, respectively.]

The ‘Official Reports’ Are Nonsense 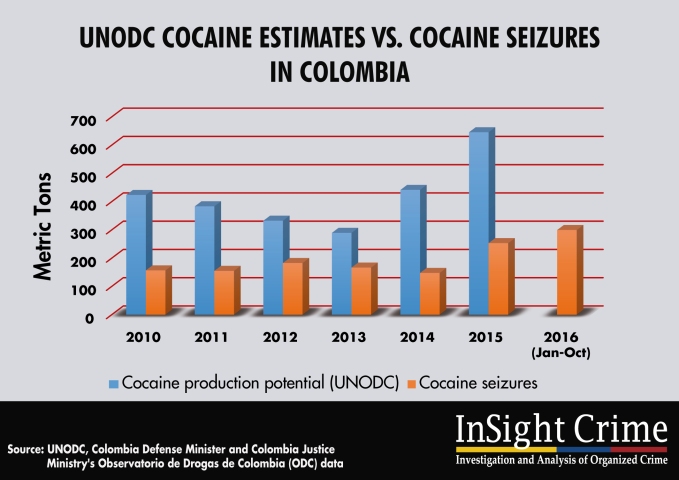 A reasonable figure for the percentage of the drug volume intercepted by the Police may be around 10%. And yet, we are supposed to believe that the Colombia counter-narcotic forces have intercepted in 2016 a volume that represents 50% of the 2015 production? (Remember that, unlike wine, cocaine does not age well….) That is simply not realistic.

Considering the fact that even a General who served as security chief for then Colombian President Alvaro Uribe is jailed in the US for his collaboration with a cocaine cartel, it would be amazing if the intercepts amount to even 10% of the total exportation. Obviously, the production must be much higher that officially reported by the UN and the US institutions.

Not convinced? Official reports usually value the cocaine market at about US$ 10 Billion per year. Again, this is hard to believe…

At the height of the 2008 banking crisis, Antonio Maria Costa — then head of the United Nations office on drugs and crime — said he had evidence to suggest:

“The proceeds from drugs and crime were the only liquid investment capital available to banks on the brink of collapse. Inter-bank loans were funded by money that originated from the drugs trade. There were signs that some banks were rescued that way.”

For the time period of 1 May 2004 through 31 May 2007, a single US bank (Wachovia)processed (i.e. laundered) more than US$ 400 Billion of cash linked to the Mexican and Colombian cartels. (The case never went to court. The bank paid a ridiculous fine: US$ 100 Million.)

That is a business of US$ 100 billion per year. Now, THAT kind of money is plenty enough to buy a few US banks during a financial crisis.. But, let us keep this one for another post.

The far-right “Cocaine Coup” in South America, Nicaragua’s revolution, and Oliver North and the CIA’s special relationships with Manuel Noriega were exposed by journalist Robert Parry in 1985. Gary Webb renewed the allegations a decade later.

RELATED POST: Courier X: A puzzle with too many pieces.

According to American Journalist Robert Parry:

“The old conventional wisdom of this being a conspiracy theory survived even if the evidence is now incontrovertible. So even NARCOS wants to avoid the issue and pretends it did not happen.”

“If you needed further evidence that the war on drugs was a nefarious government plan full of corruption then here it is: Pablo Escobar, one of the most well known drug lords in history was in cahoots with the CIA. Yeah.

Let THAT sink in for you. The late Colombian drug kingpin was paid by the CIA to pump cocaine into this country, according to his son.

What’s more, a former adviser to War on Drugs cheerleader Nixon admits who the “war” was meant to target all along.”