“The gesture would be a token of obvious gratitude for Kuklinski for his dangerous and intensive work for Poland’s independence.”

”Nobody and nothing could possibly change my mind or lead me off the chosen path. . . . I was additionally convinced that I am not alone traveling the road, that the nation desires freedom from the shackles of Communism imposed from the outside.” 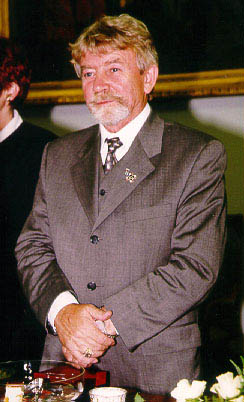 November 11 2016 — President Andrzej Duda has posthumously promoted Ryszard Kuklinski, a Polish Army colonel who worked for the CIA during the Cold War, to the rank of brigadier general. Follow us on Twitter: @INTEL_TODAY

RELATED POST: Radio Pyongyang Resurects its ‘NUMBERS STATION’. How does it work anyway?

RELATED POST: Dutch Intelligence Services operated with the CIA behind the Iron Curtain

UPDATE (November 11 2018) — On February 11 2018, ceremonies have been held in several Polish cities to mark the anniversary of the death of Ryszard Kukliński, a Polish Army colonel who worked for the CIA during the Cold War.

In Poland, Kukliński remains a controversial figure. A poll taken in 1998 found that more Poles (34%) considered Kukliński a traitor than a hero (29%).

His monument (inaugurated in 2006) in Kraków has been vandalized three times, first on December 13, 2011, (the anniversary of martial law in Poland) and then on February 11, 2012 (the anniversary of Kukliński’s death). In both cases, Polish nationalist symbols together with the terms such as: “Traitor”, the crossed CIA name and “Death to the USA” were also sprayed. On February 11, 2014, his statue was found splashed with brown paint.

The ‘accidental’ deaths of both his sons in the USA (August 1994 and January 1995) are quite suspicious. Although Ryszard Kukliński never claimed that they were assassinated by the KGB, he never rejected such a possibility either.

The promotion was in response to a request made in February by the country’s Defence Minister Antoni Macierewicz.

Over the years, he provided the Americans with information about strategic Soviet and Warsaw Pact plans, including plans for an attack on NATO countries.

He also passed to the CIA documents about the Polish government’s secret plans to impose martial law in the country in 1981. Kuklinski died in 2004 in Tampa, Florida, in the United States.

Facing imminent danger of discovery due to denouncement by Communist secret collaborator known only by his alias “Prorok”, Kukliński was spirited out of Poland by the CIA, along with his wife and two sons, shortly before the imposition of martial law in December 1981.

Though Kuklinski and his family managed to successfully defect, his controversial past may have followed him to the United States. In subsequent years, both of his sons died.

The older, Waldemar, was run over by a truck without a licence plate in August 1994 on the grounds of an American university.

His younger son, Bogdan Kukliński, drowned half a year later on January 1, 1995, when his yacht capsized on a silent sea. [WIKIPEDIA]

In 1972, Polish Colonel Ryszard Kuklinski volunteered to spy for the United States. His self-appointed mission: to undermine his country’s Soviet-dominated leadership to save Poland from nuclear destruction.

Over the next nine years of high-risk, clandestine exchanges, he copied tens of thousands of secret documents and covertly passed them to the CIA—including plans to crush the Solidarity movement.

Learn the inside story of this extraordinary case and of Kuklinski’s last-minute, daring escape from International Spy Museum Executive Director, Peter Earnest, a former CIA officer who did unprecedented research into Agency records for Benjamin Wesier’s A Secret Life: The Polish Officer, His Covert Mission, and the Price He Paid to Save His Country.

The Vilification and Vindication of Colonel Kuklinski by Benjamin B. Fischer — CIA Website