“Leslianne received a star on the CIA Memorial Wall in 1996 and was posthumously awarded the Agency’s Exceptional Service medallion. Her name was unveiled in the Book of Honor in 2012.”

“Leslianne Shedd—a young, courageous, highly successful CIA operations officer serving in East Africa—was a passenger on an Ethiopian Airlines flight when it was hijacked and then crashed into the Indian Ocean on November 23, 1996, killing 125 people, including Leslianne. Survivors said that Leslianne spent her final moments comforting those around her.”

“When my sister Leslianne Shedd, ’90, was killed in the 1996 crash of a hijacked Ethiopian Airlines plane, my family not only went into mourning. We also continued to keep a secret: Leslianne didn’t work for the U.S. State Department, as she told everyone. She worked for the CIA, fighting terrorism in Africa.  When Lesli (right) was killed, there was a private memorial ceremony at CIA headquarters at Langley. Then in May of the following year, she was given an anonymous star on the CIA Wall of Honor. The CIA told us that at some point, we would be able to talk about her.” 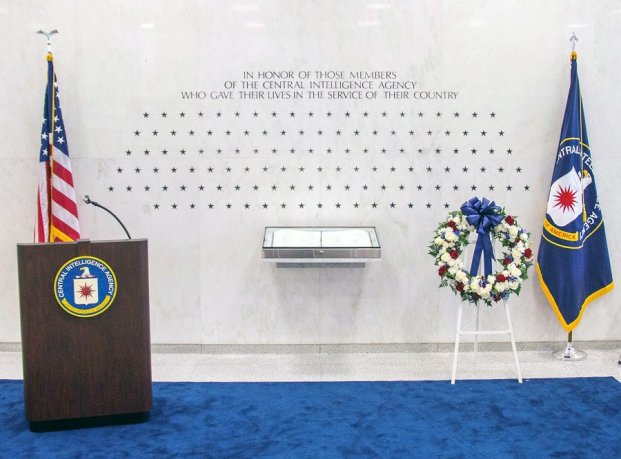 The Memorial Wall is a memorial at the Central Intelligence Agency headquarters in Langley, Virginia. It honors CIA employees who died in the line of service. There are 129 stars carved into the white Alabama marble wall. At least ten represent women.

Leslianne Shedd was killed on November 23, 1996. She was a passenger on a hijacked Ethiopian Airlines plane that crashed in the Indian Ocean near the Comoro Islands. Follow us on Twitter: @INTEL_TODAY

Flight 961 was about to take off from Addis Ababa when several apparently intoxicated Ethiopians boarded the plane and demanded that it be flown to Australia. The hijackers ignored the pilot’s repeated claim that the plane needed to refuel.

Born in Binghamton, New York, Leslianne (known to friends and family affectionately as “Lesli”) moved with her family to the state of Washington when she was two years old. She graduated with honors from Puyallup High School in 1986; graduating in the top 3 percent of her class.

She took on an active leadership role in school, and was a member of both the Spanish and German clubs. She also participated in her high school’s American Field Service program for students interested in working with students from foreign countries.

Her high school principal recalled that Lesli was known as being “outgoing and vivacious,” and her English teacher remembered her as a warm, caring, and kind person. “She was perky and just a little ray of light,” she said.

Lesli went on to earn a bachelor’s degree from the Jackson School of International Studies at the University of Washington in 1990. She spent the spring 1988 semester studying in Cologne, Germany.

At the University of Washington, Leslianne was a member of the Chi Omega Sorority. She played intramural soccer and was also a runner. She enjoyed dance — jazz and ballet. She also worked as a nurse’s aide, a secretary at Weyerhaeuser Company, and a law office clerk and paralegal researcher.

Leslianne began working at the CIA in February 1991. She received extensive training in operations and completed the Career Training Program in 1992. Her training included an interim assignment in the Directorate of Operations (DO) Africa Division, where she was responsible for operational support to several stations abroad.

Her first assignment was at Headquarters in the DO’s Africa Division, where she served as the desk officer helping to prepare outgoing correspondence to the field, among many other tasks.

By the spring of 1993, she had also completed six months of French language training in preparation for an assignment overseas.

In July 1993, Lesli began a two-year tour as a junior operations officer in West Africa. As a first-tour officer, she impressed her colleagues and managers with her imaginative developmental work, including risky but successful recruitment efforts aimed at targets with access to terrorist groups. All of this added up to a highly successful first tour.

Leslianne’s second overseas tour began in summer 1995 at one of the DO’s most active stations in East Africa. Lesli arrived at an extremely dangerous time: there were increased threats against US personnel in the region, and a terrorist group had recently staged an attack against Egyptian President Hosni Mubarak while he was visiting Ethiopia.

Tensions were high in the region, which meant that she and her co-workers had to operate with a heightened sense of personal and operational security. They also faced serious threats from internal opposition groups.

Leslianne, however, appeared undaunted by all this.

Lesli was very successful in her mission, which included developing and recruiting agents, some of whom provided critical information on individual terrorist movements. She performed her time-consuming duties with distinction.

Her bosses and co-workers constantly highlighted her fun-loving spirit, and brilliant use of precise, pointed language in her reports and correspondence back to headquarters. The Chief of Africa Division praised Lesli’s courageous efforts against terrorist targets in Africa.

Leslianne Shedd was killed on November 23, 1996. She was a passenger on a hijacked Ethiopian Airlines plane that crashed in the Indian Ocean near the Comoro Islands.

Flight 961 was about to take off from Addis Ababa when several apparently intoxicated Ethiopians boarded the plane and demanded that it be flown to Australia. The hijackers ignored the pilot’s repeated claim that the plane needed to refuel.

Several hours later, during an emergency-landing attempt at Moroni, the capital of the Comoro Islands, the plane ran out of fuel and crashed into the ocean near a beach resort.

That ill-fated flight was the first leg of what was to have been a Thanksgiving holiday in East Africa for Lesli and several friends. About an hour into the flight, a hijacking was announced. Lesli and her companions were seated in the economy class section toward the rear of the aircraft; the terrorists tended to concentrate near the cockpit. As a result, the group got no more than a brief glimpse of the hijackers.

No panic occurred; everyone remained calm.

About three hours later the pilot announced that he was about to attempt a crash landing in the Indian Ocean and that passengers should put on their life preservers. The plane headed toward the water at 150 mph.

Leslianne did not panic. From her window seat, she assisted her friends sitting beside her. She then spotted an elderly Ethiopian woman fumbling with her life jacket. Lesli unbuckled her own seatbelt, stood up, and helped the woman. She then sat down and tried to calm her seatmate and best friend in Africa.

Her friend, who survived the crash, could only remember being under what she estimated as some 20 feet of water. The next thing she recalled was being on the surface, with no sign of Leslianne.

Leslianne Shedd was survived by her mother, father, sister, and brother. She was 28 years

Leslianne received a star on the CIA Memorial Wall in 1996 and was posthumously awarded the Agency’s Exceptional Service medallion. Her name was unveiled in the Book of Honor in 2012.

During the 2012 Annual Memorial Ceremony, standing before the Memorial Wall in the lobby of CIA headquarters, Director David Petraeus talked of the sacrifice and service of Lesli and her colleagues:

“The souls represented by the stars on the wall behind me all heard the same call to duty and answered it without hesitation,” he said. “Never for acclaim, always for country.”

He continued: “They devoted their hearts and minds to a mission unlike any other, at an agency unlike any other, serving on the world’s most dangerous frontiers to defend our people, defeat our adversaries, and advance our freedoms. Their words and deeds will inspire us forever, and their service and sacrifice will never be forgotten.”

Lesli’s spirit of adventure and compassion toward those in need lives on in a scholarship for students studying international affairs or public health. Just prior to her death, Lesli had applied to a physician’s assistant program: She wanted to make a difference by providing health care to underserved communities in Africa.

Her family started the Leslianne Shedd Memorial Fund at the University of Washington in her honor. [Remembering CIA’s Heroes]

Women of the CIA — Newsweek

The Mystery of Jane Wallis Burrell: The First CIA Officer To Die in the Agency’s Service — CIA news & Information

Tribute to Women Who Have Died — STUDIES IN INTELLIGENCE

Who was Elizabeth Hanson? — COLBY Magazine