“This is an open wound in Swedish society. It is extremely important that this is solved.”

“The Anti Apartheid Conference in Stockholm, it is suggested by our Swedish Sources in Uppsala, would present the ideal opportunity to take the necessary action against Mr. Palme and it would be possible to ensure that the action be attributed to other groups.” 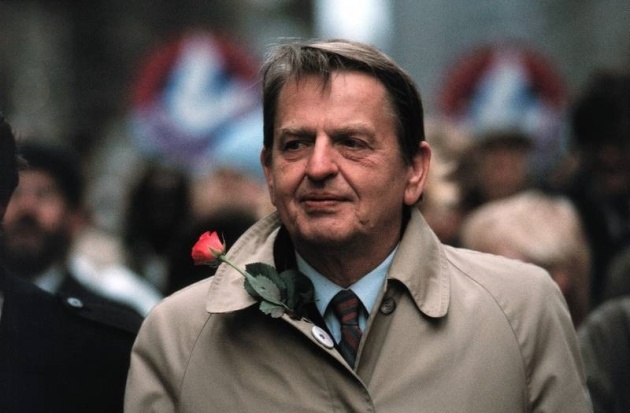 January 2 2019 —  We continue our review of the top 10 stories that the readers of INTEL TODAY have consulted the most in 2018. These stories have attracted more than hundred thousand visitors and reached almost every single country on earth! Most of our visitors come from the Five Eyes countries — Australia, Canada, New Zealand, the United Kingdom and the United States — Hong Kong (China), as well as Switzerland, Germany, Netherlands France, and … Belgium; surely a reminder that Brussels in now regarded as a city of spies due to its alleged highest density of spooks anywhere in the world. Follow us on Twitter: @Intel_Today

RELATED POST: On This Day — Benazir Bhutto Is Assassinated (December 27 2007)

RELATED POST: WORMWOOD — Seymour Hersh : “Frank Olson was a man profoundly distressed about what he was learning… And he was dangerous.”

UPDATE (January 2 2019) — One wonders why the Main Stream Media — even in Sweden — have not investigated and reported this amazing breakthrough?

Recently, I asked Swedish author and journalist Sixten Svensson why the story is downplayed even in Palme’s country?

His answer was as simple as it is sad.

“The news are not coming from AP or Reuter, it comes from lonely digging journalists!”

The mystery surrounding the killing of Prime Minister Olof Palme continues to fascinate Swedes and has spawned a few more silly theories over the last 12 months. None are worth being discussed.

In May 2018, Sweden’s Prime Minister Stefan Lofven commented on the case on Swedish TV.

“This is an open wound in Swedish society. It is extremely important that this is solved.”

There is no doubt whatsoever that, with a bit of help from the South Africa government, this crime could be solved once and for all. The sooner, the better.

The murder of Prime Minister Olof Palme on February  28 1986 shocked Sweden and had a great impact across Scandinavia.

A local convict and addict Christer Pettersson was originally convicted of the murder but was acquitted on appeal. The crime remains unsolved to this day.

Now, a document from South Africa Military Intelligence clearly indicates that the Apartheid regime’s spooks are almost certainly the culprits of this odious assassination.

On February 18 1986, just before midnight, Olof Palme was walking home from a cinema with his wife Lisbeth Palme in the central Stockholm street Sveavägen when he was shot in the back at close range. A second shot grazed Lisbet’s back.

The Prime Minister was pronounced dead on arrival at Sabbatsbergs sjukhus hospital.

The report concludes that Mr. Palme must “now be seen as an enemy of the State.”

South African spies in Sweden are aware that an “Anti Apartheid Conference” will be held in Sweden in February 1986.

The report recommends that “the previously suggested action against Mr. Palme should now receive urgent attention.”

Finally, the report concludes that:

“The Anti Apartheid Conference in Stockholm, it is suggested by our Swedish Sources in Uppsala, would present the ideal opportunity to take the necessary action against Mr. Palme and it would be possible to ensure that the action be attributed to other groups.”

Regarding the Swedish-Soviet relations, the CIA wrote:

“Palme believed his official visit to Moscow scheduled for April 1986 would significantly enhance the Swedish-Soviet dialog.” 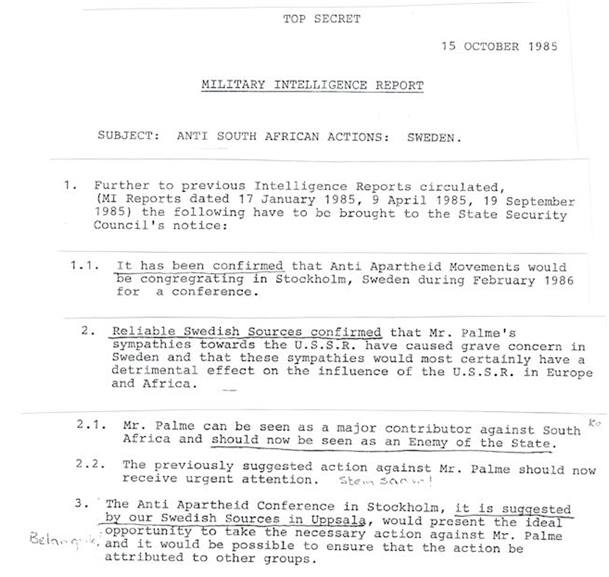 UPDATE (April 2 2018) — Several readers have raised questions regarding the authenticity of the SA Military Intelligence document.

Others wonder why Palme was ‘suddenly’ branded an “ENEMY of the STATE” in late 1985?

Authenticity — There is absolutely no doubt that this document is genuine. Intel Today received this document from Swedish journalist Anders Leopold.

Leopold obtained this document — and a few others — from Deborah Matthews, archival coordinator at the South African History Archive (SAHA), Johannesburg, South Africa.

These documents were donated by the South African journalist and author De Wit Potgieter, who found some them among the remains of the South Africa Military Intelligence Service (MI) archive.

A large part of this  secret documents archive was unfortunately destroyed in 1994 when the apartheid regime broke down.Many files are therefore missing and/or incomplete.

Enemy of the State — One need to look back at the historical context to understand why Palme — and his government —  was indeed a “clear and present danger” to the survival of the apartheid regime.

By 1986, the anti-apartheid movement was at its strongest in Europe. There was a permanent (24/7) demonstration outside South Africa House in London. Many companies had been persuaded to disinvest from South Africa. meanwhile, South Africa’s “slave states” of Mozambique, Angola, Namibia and others were seeing a rise in resistance movements with world-wide support.

One of those prominent anti-apartheid supporters was — of course — Olof Palme. He was strongly opposed to apartheid and the SA government at a time when Margaret Thatcher and Ronald Reagan strongly supported them.

Sweden had also welcomed many US draft-dodgers and escapees from the Vietnam war and the Swedish government strongly opposed US aggression in Central America.

[Indeed, a young fellow by the name of Bill Clinton attempted to obtain Swedish citizenship!]

Some investigators have suggested that Palme was about to blow the whistle on the Iran-Contra scandal.

At that time, many idealistic liberals in Europe saw Sweden under Palme as a haven against Thatcherite and Reaganite aggressive capitalism and military interventions in poor countries. It was no secret that Thatcher and Reagan hated Palme.

According to Anders Leopold’s own analysis, there was no ‘special trigger’ in 1985 that precipitate the decision to assassinate Palme.

“It was nevertheless a time when Palme was leading the boycott against South Africa and got the whole world with him,” Leopold told Intel Today.

“In the Nordic program, importers and exporters were recommended to seek out new markets and prevent procurement of South African products.

So when signals came from the United States that they wanted to remove Palme — fearing that he, as a peace maker in the Iran / Iraq war was about to expose the United States illegal arms trade with Iran — the South Africa’s military security service was commissioned to stop him.”

The Assassination of Olof Palme