“For an American to be patriotic is to be loyal to the principles of our Constitution, and the First Amendment. The truth is that the policies of the government is sometimes in conflict with that. In our country, patriotism should not be defined as obedience to an authority.”

“A much bigger hats off to the movie as a whole, a commercial feature film that focuses on a core concern of our time—the role of honest, fearless journalism in a free society—and rises to it with steady intelligence and the unforced beauty of Meryl Streep’s performance.” 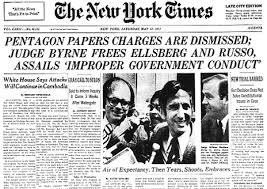 March 7 2017 — Spielberg’s next movie “The Post” is a film about American journalists challenging the US government over whistleblowing documents leaked by Daniel Ellsberg in 1971. Update (January 18 2018) — “The Post” was released on January 12 2018 and received highly positive reviews. A year ago, I wrote: “My feeling is that there is an audience for such movies and documentaries right now.” The $50m-budgeted 20th Century Fox release earned $18.6m over the Friday-Sunday frame. Follow us on Twitter: @Intel_Today

RELATED POST: US Whistleblowers — Test your ‘Spy’ knowledge with our quiz!

UPDATE (January 18 2019) — Thomas Drake, Stephen Jin-Woo Kim, Jeffrey Sterling, and John Kiriakou are not as well-known to the public as Daniel Ellsberg and Edward Snowden.

But they deserve credit for what they did. Steven Spielberg and Oliver Stone may not cover all these stories, but surely others could.

My feeling is that there is an audience for such movies and documentaries right now. What a pity that Steven Spielberg gave up on his project to tell the true story of Pan Am 103!

The movie will cover the Washington Post editor Ben Bradlee and publisher Katharine Graham as they challenged the government in the early 70s. (Tom Hanks is set to play Bradlee while Meryl Streep will play Graham.)

The Espionage Act of 1917 makes it a crime to disclose information “relating to the national defense.”

Out of a total ten prosecutions under the Espionage Act against government officials accused of providing classified information to the media, seven have occurred during Obama’s Presidency.

Prior to the Obama administration, there had been only three known cases resulting in indictments in which the Espionage Act was used to prosecute government officials for leaks: Daniel Ellsberg and Anthony Russo 1971, Samuel Morison 1985 and Lawrence Franklin 2005. (There is a ‘similar’ — but rarely discussed  — case dating from 1945.)

The first case (1971) was about the ‘Pentagon papers’: Daniel Ellsberg and Anthony Russo.

The ‘Pentagon Papers’ revealed that the U.S. had secretly enlarged the scale of the Vietnam War with the bombings of nearby Cambodia and Laos, coastal raids on North Vietnam, and Marine Corps attacks, none of which were reported in the mainstream media.

For his disclosure of the Pentagon Papers, Ellsberg was initially charged with conspiracy, espionage, and theft of government property, but the charges were later dropped after prosecutors investigating the Watergate Scandal soon discovered that the staff members in the Nixon White House had ordered the so-called White House Plumbers to engage in unlawful efforts to discredit Ellsberg. [WIKIPEDIA]

PS1: Thomas Drake, Shamai Leibowitz, Chelsea manning, Stephen Jin-Woo Kim, Jeffrey Sterling, John Kiriakou are not as well-known to the public as Daniel Ellsberg and Edward Snowden. But They deserve credit for what they did. Steven Spielberg and Oliver Stone can not cover them all, but surely others could. My feeling is that there is an audience for such movies/documentaries right now.

PS2: What a pity that Steven Spielberg gave up on his project to tell the true story of Pan Am 103 (Lockerbie).

“A stirring defence of freedom of the press, The Post arrives at a time when the words ‘fake news’ echo through almost every political conversation. Director Steven Spielberg rushed the project into production because its story, set in 1971 when President Richard Nixon ruled like a crime boss, speaks so potently to the world today.”  [BBC Culture]

The Post received highly positive reviews, with critics praising the performances of Streep, Hanks and Odenkirk. Many critics have noted the film’s comparisons of the administrations of Richard Nixon and Donald Trump. It was chosen by the National Board of Review as the best film of 2017, and was named as one of the top 10 films of the year by Time and the American Film Institute.

“Even as The Post warns about the threats to journalism, though, it offers hope. When the president rails against the press, he is seen from a distance, a shadowy figure in the White House. But the voice Spielberg uses is authentically Nixon’s own, from his once-secret tapes. Nixon did everything he could to silence the press. We know how that turned out.”

Steven Spielberg directs Meryl Streep and Tom Hanks in The Post, a thrilling drama about the unlikely partnership between The Washington Post’s Katharine Graham (Streep), the first female publisher of a major American newspaper, and editor Ben Bradlee (Hanks), as they race to catch up with The New York Times to expose a massive cover-up of government secrets that spanned three decades and four U.S. Presidents. The two must overcome their differences as they risk their careers – and their very freedom – to help bring long-buried truths to light.