“Our relationship with the United States is historic and strategic. Any attempts to undermine that will falter.” 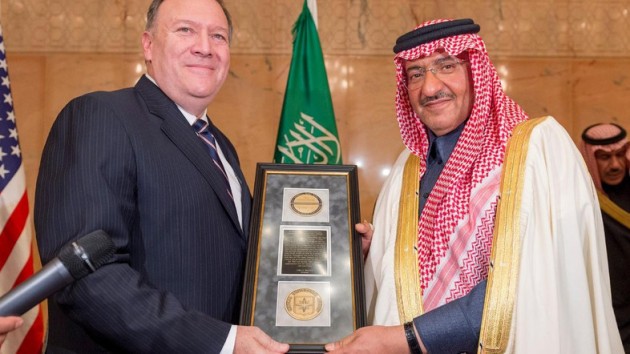 January 11 2017 — On Friday (February 10 2017), CIA Director Mike Pompeo honoured the Saudi Crown Prince with the CIA ‘George Tenet’ Medal during a meeting in Riyadh. Follow us on Twitter: @Intel_Today

RELATED POST: CIA Director Mike Pompeo — Who Is Who in World Intelligence and Security Agencies?

Not so long ago, CIA Director Mike Pompeo explained how the Agency could solve a far greater puzzle — the 2017 Khan Shaykhoun chemical attack — in just 24 hours by assembling a team of experts. Go figure!

The reception was attended by senior officials and the US Charge d’Affaires to the Kingdom Christopher Hensel.

The CIA handed the Crown Prince the medal for ‘his distinct intelligence-related counter-terrorism work and his contributions to ensure international peace and security’.

In a press statement, the Crown Prince said that he appreciated the CIA honor.

“We, God willing, continue to confront terrorism and extremism everywhere, and with thanks to God we have managed to thwart many terrorist plots from occurring.”

“We are surrounded by areas of conflict, and we were the first affected by terrorism from various sources, but we are equipped to combat terror in any place and under any circumstances.”

“The US Central Intelligence Agency has granted its “George Tenet Medal” to the Saudi Crown Prince for what the agency calls his “intelligence work in the fight against terrorism.”

The medal was given to Mohammed bin Nayef by CIA Director Micheal Pompeo during a reception ceremony in the Saudi capital Riyadh. Nayef said Saudi Arabia’s relationship with the U-S is “historic and strategic”.

He added that the move shows Washington’s recognition of what he called Riyadh’s anti-terrorism efforts. This is while Saudi Arabia stands accused of supporting terrorist groups fighting inside Syria since 2011.

The Kingdom has also been engaged in a deadly military campaign against Yemen since March 2015.

Relations between Washington and Riyadh strained last year over congressional legislation seeking to make it easier for families of 9/11 victims to sue Saudi Arabia. Fifteen of the 19 hijackers who carried out the September 11, 2001 attacks came from Saudi Arabia.”