“In fact, the science of thermodynamics began with an analysis, by the great engineer Sadi Carnot, of the problem of how to build the best and most efficient engine, and this constitutes one of the few famous cases in which engineering has contributed to fundamental physical theory. Another example that comes to mind is the more recent analysis of information theory by Claude Shannon. These two analyses, incidentally, turn out to be closely related. ”

“During an early foray into telegraphy, I realized that a little communication error could turn ‘Do you like me?’ into ‘Do you hear me?’ Which she was answering was very important to me.” 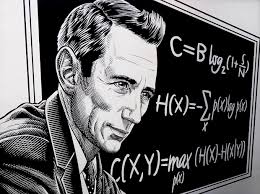 July 28 2019 — The documentary tells the story of Claude Shannon, the scientist who foresaw the information age and artificial intelligence. Follow us on Twitter: @INTEL_TODAY

RELATED POST: Think On These Things : Should Spies Use Cryptography?

In a delightful new film, The Bit Player—Claude Shannon: Prophet of Information, director Mark Levinson takes a look at the largely unknown man whose 1948 paper on the mathematical theory of communication laid the foundations for the information age.

In his landmark 1948 paper in the Bell System Technical Journal, he claimed there was a theoretical speed limit to the accurate transmission of data, which became known as the Shannon limit.

Shannon received acclaim during his lifetime and was eventually lured from Bell Labs to MIT. But after a while, especially with computer scientists long unable to find the codes required to achieve the Shannon limit, he receded into obscurity.

Eventually, however, Shannon was vindicated.

Fifty years on, the final piece of Shannon’s vision of the future was proved to be true. You could have perfect communication with as little errors as you wanted. [Physics Today]

The documentary links Shannon’s interests in information and communication to his early interests in codes, patterns, chess, and the like.

Indeed, Shannon maintained his interest in gadgets and toys and built many remarkable ones, including juggling figures, a chess-playing computer, a flaming trumpet, and unicycles of various designs.

In the summer of 1961, Claude Shannon and Edward Thorpe walked into a Las Vegas casino wearing, for all intents and purposes, the world’s first wearable computer.

“These two MIT math professors weren’t exactly there to take down the house — they certainly didn’t have the bankroll — but they were there to show they could crack the game of roulette, at least in principle.” [The Greatest Heist of All Time]

To pull it off Shannon and Thorpe built a homemade computer about the size of a large paperback.

PS: While a professor of mathematics at MIT, Edward Thorpe [Beat the Dealer: A Winning Strategy for the Game of Twenty-One] met Claude Shannon, and took him and his wife Betty Shannon as partners on weekend forays to Las Vegas to play roulette and blackjack, at which Thorp was very successful.

Thorp analyzed the game of blackjack, while devising card-counting schemes with the aid of the IBM 704 in order to improve his odds, especially near the end of a card deck that is not being reshuffled after every deal. Thorpe received many advises from Shannon during this project.