“With what is happening in the U.S. and the possible instability that is going to come in U.S. policy you needed a voice of reason and pragmatism that had some heft to it. He was that voice. Losing that voice is going to make it more likely that any mishap or miscalculation by the Trump team will beget a more unreasonable, more radical, more potentially destructive response by the Iranian regime.” 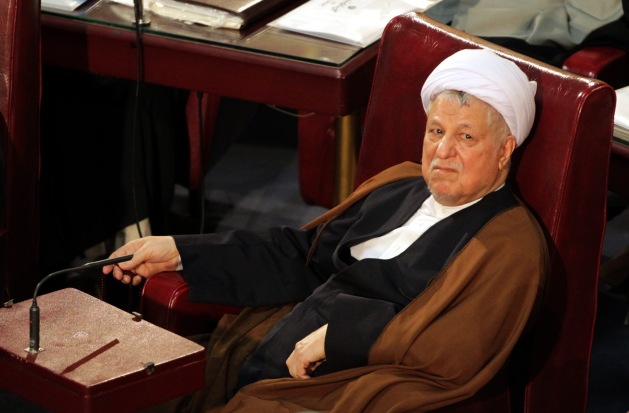 Former Iranian president Akbar Hashemi Rafsanjani died on Sunday at the age of 82. A U.S. State Department official on Sunday described Rafsanjani ‎as a “prominent figure” throughout the history of the Islamic Republic of Iran. “We send our condolences to his family and loved ones,” the official said in a statement. Rafsanjani was certainly a prominent figure of ‘International Intrigues and Terrorism’. Follow us on Twitter: Intel_Today

Rafsanjani had an active rule in Iran–Contra affair. He was named by prosecutors in Argentina among Iranian officials suspected of links to a 1994 bombing of a Jewish center in Buenos Aires that killed 85 people. In 1997 during the Mykonos trial in Germany, it was declared that Rafsanjani, the then president of Iran, alongside of Ayatollah Khamenei, Velayati and Fallahian had a role in the assassination of Iran’s opposition activists in Europe.

This author has long suspected that Rafsanjani is responsible for one of the most odious crime of the 20th century.

The following is taken from a investigative report written by Geoffrey Robertson QC.

Late in July 1988, as the war with Iraq was ending in a truculent truce, prisons in Iran crammed with government opponents suddenly went into lockdown. All family visits were cancelled, televisions and radios switched off and newspapers discontinued; prisoners were kept in their cells, disallowed exercise or trips to the infirmary.

The only permitted visitation was from a delegation, turbaned and bearded, which came in black government BMWs or by helicopter to outlying jails: a religious judge, a public prosecutor, and an intelligence chief.

Before them were paraded, briefly and individually, almost every prisoner (and there were thousands of them) who had been jailed for adherence to the Mojahedin Khalq Organisation– the MKO.

By mid-August 1988, thousands of prisoners had been killed in this manner by the state – without trial, without appeal and utterly without mercy.

Ali Akhbar Hashemi Rafsanjani was the ‘inner circle’ member whom the Supreme Leader came to rely upon most. He was Acting Commander and Chief of the Armed Forces and another key advisor of the ceasefire: he would have been responsible for the Revolutionary Guard detachments sent to the prisons and would have authorised the firing squads which in some provinces conducted the executions.

He also led the Friday sermons in Tehran around this time, in which he led crowds in chanting slogans such as “Death to the Monafeqin prisoners”. In December 1988 he too defended the executions, whilst pretending that “less than a thousand” prisoners had died.

Several commentators have interpreted the prison massacres as part of the power struggle by Rafsanjani’s faction to remove Montazeri as successor to the dying Khomeini – it is alleged they urged the killings in the knowledge that the more humane heir-apparent would earn the Supreme Leader’s wrath by objecting. This would make Rafsanjani a prime suspect. [GEOFFREY ROBERTSON ]

This is indeed exactly what happened! On 26 March 1989, Khomeini strongly denounced Montazeri’s actions. A couple of days later, Khomeini announced that Montazeri ‘had resigned his post’.

Khomeini died on June 3rd 1989. Rafsanjani was instrumental in securing a quick solution to an urging crisis.

First, Ali Khamenei was elevated from the position of hojatoleslām to the rank of Ayatollah. That title, and a modification of the Constitution which previously restricted the job to the few people such Montazeri who had the title of Grand Ayatollah, was then enough to promote him as Khomeini’s successor.

Next, Rafsanjani himself was elected Iran’s president on August 3rd 1989. Rafsanjani would not disappoint Western powers and their business interests.

Soon after the tragedy of Pan Am 103 on December 21st 1988, the investigators suspected that a Syrian-based terrorist group (the Popular Front for the Liberation of Palestine – General Command) was responsible. It was assumed by some (known by others?) that Iran had ordered the attack as revenge for the downing of Iran Airbus 655 on July 3rd 1988.

When a joint US/UK indictment finally came in November 1991, Libya – and Libya alone according to President Bush- was the culprit. How did they get from Iran to Libya?

Jack Anderson and Dale Van Atta claimed in 1990 that the Lockerbie investigation switched from Iran to Libya following a phone call in March 1989 between George H W Bush and Margaret Thatcher. [Van Atta has recently confirmed to a friend of mine that this information is 100% accurate.]

By September 1989, blaming Iran for Lockerbie would not serve the geopolitical interests of the US and UK.

And lo and behold, in September 1989, the investigation switched away from Iran to solely focus on Libya thanks to the mysterious ‘discovery’ of a tiny circuit board known as PT/35(b). The rest is History…

Justice was not served. But as Marcel Pagnol wrote:

“A wise man does not look for the culprits of a crime. A wise man chooses the right culprits.” And the obvious “culprit” was Libya.

The next Supreme Leader

Morteza Eshraqi, the Tehran Prosecutor and now a judge on the country’s Supreme Court was identified by many survivors as one of the three judges  involved in their initial prosecutions. Another prosecutor who took his place on occasion was his deputy, Ebrahim Raisi, who went on to become the Head of the General Inspection Organisation and is now the Deputy Head of the Judiciary [NB: from 2004 to 2014 ]. [GEOFFREY ROBERTSON QC]

As already mentioned, there have been widespread rumors regarding Khamenei’s health. Many believe that the current Assembly of Experts that was elected last February will have to appoint the next Supreme Leader. Undoubtedly, Khamenei himself would play a leading role in choosing his successor.

While former and current judiciary chiefs, Mahmoud Hashemi Shahroudi and Sadegh Larijani, as well as Khamenei’s son, Mojtaba, have been mentioned as possible successors, Raisi, a member of the death committee, has emerged not only as one of the possible candidates, but also as a more likely one. [HUFF POST]

The Massacre of Political Prisoners in Iran, 1988
REPORT OF AN INQUIRY CONDUCTED BY GEOFFREY ROBERTSON QC

Geoﬀrey Robertson QC is founder and Head of Doughty Street Chambers, London. He has appeared in many countries as counsel in leading cases in constitutional, human rights, criminal and international law and served as the ﬁrst President and Appeal Judge in the UN War Crimes Court in Sierra Leone, where he authored landmark decisions on the limits of amnesties, the illegality of recruiting child soldiers and other critical issues in the development of international criminal law. In 2008, he was appointed by the UN Secretary-General as one of the “distinguished jurist” members of the UN Internal Justice Council.

A Criminal As The Successor To Khamenei? — HUFF POST